Chibok, Nigeria, April 8, 2016 -- The road to Chibok from Damboa in northeast Nigeria isn't really a road. It's a dusty track where the only indications of a thoroughfare are the tyre marks in the sand of the taxis, lorries and cars that have gone before.

Vehicles bump along the uneven surface, kicking up choking dust and sand even at low speeds. Often it's difficult to see the car in front. 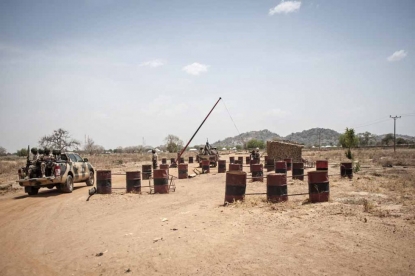 A military convoy passes through a checkpoint in Chibok in March, 2016. (AFP / Stefan Heunis)

Few people outside the region had heard of Chibok until two years ago.

Then, on the night of April 14, 2014, Boko Haram fighters stormed the Government Girls Secondary School on the outskirts of the town and abducted 276 teenagers from their beds.

The kidnapping -- and the 219 girls who are still being held -- raised awareness around the world of a brutal conflict that had largely gone unnoticed outside Nigeria. 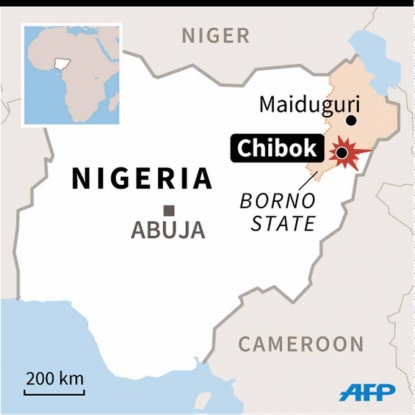 AFP had been trying to get to Chibok ever since the kidnapping, but security concerns ruled out travelling: the Islamist militants were in control of most of Borno in 2014 and the state was the focus of a military fight-back throughout last year.

But even with the army now back in control of most of the northeast and the permission of the military to go, the theatre commander in the state capital, Maiduguri, insisted on a heavily armed escort. We soon found out why.

Not a soul to be seen

Major roads to and from Maiduguri were re-opened late last month, nearly three years after they were shut because of repeated Boko Haram attacks.

The move has offered hope for a return to normal life after nearly seven years of fighting that has killed an estimated 20,000 people and left at least 2.6 million people homeless. But it's hardly care-free motoring. 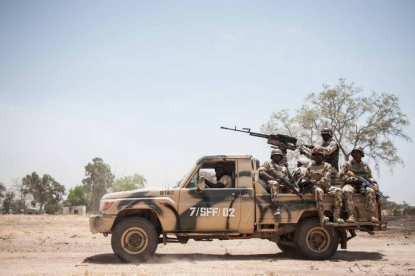 At the city limits in Maiduguri, hundreds of cars, taxis, minibuses and lorries laden with people and goods or both wait in the searing heat for the go-ahead to move the 90 or so kilometres (55 miles) southwest to Damboa.

AFP's convoy comprised an armoured personnel carrier, two army pick-up trucks in front and two behind, all camouflaged to match the parched terrain and equipped with heavy machine guns.

Just outside the city, children and adults wave or raise a clenched right fist in the traditional Hausa greeting.

As the road stretches out into the bush, unfinished or abandoned low-rise houses give way to trees and low shrubs with branches and thorns as sharp as the piercing sun. 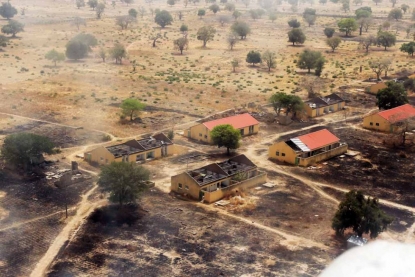 Deeper into the scrub, the sobering effects of war are more visible: patches of tarmac potholed by explosions or shells; cars, pick-up trucks like the one we're travelling in and minibuses blown up, burnt-out, twisted or cut in half.

Buildings are pockmarked with bullets or gutted by fire. In an area that was already sparsely populated before the conflict, there's now not a soul to be seen.

The vehicles slalom at speed in and out of the hazards and the occasional roadblock of felled trees and battered oil drums to a soundtrack of Nigerian gospel music.

Then the lieutenant in the front passenger seat switches off the music and picks up his rifle.

I try to work out which direction the shooting is coming from. My heavy flak jacket and helmet suddenly don't seem nearly enough protection.

Everyone glances to the soldiers. Reassuringly, they seem unperturbed. 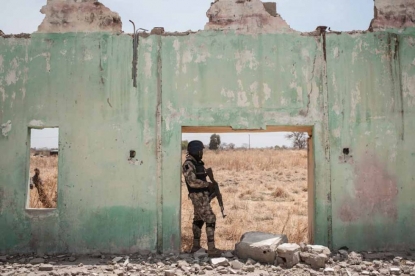 The location -- a denser area of trees where a person could easily be hidden from the road and mount an ambush -- is a known crossing point for the rebels between their bases in the southeast and the southwest of Borno.

Clothes have been spotted in the trees -- a signal from the insurgents they have scouted out the area at night. The military firing back lets them know they've seen the sign.

The tactic and the explanation underlines what we've been hearing for some months now: that despite government assurances the insurgents are "technically" defeated, Boko Haram fighters are still around and a threat.

I’m thankful I'm not taking my chances in the vulnerable civilian convoy.

The difference between Damboa and Chibok

Life is resuming in Damboa. Vigilantes in civilian clothes carrying home-made single-shot muskets, slingshots and sticks, man the checkpoints at the edge of town and soldiers lounge under trees.

On the road, freshly boiled tar is poured to repair blast damage to the surface. To one side, motorbikes seized from the militants are torched.

In the town centre, roadside traders selling oranges, water melon, mangoes and red onions provide a vibrant flash of colour as we pass.

Battered trucks are loaded high with firewood and sacks of grain. Porters rest alongside empty trolleys and wheelbarrows, and goats meander among the crowds, bleating noisily out of time to the music, which blares out at a distorted volume. 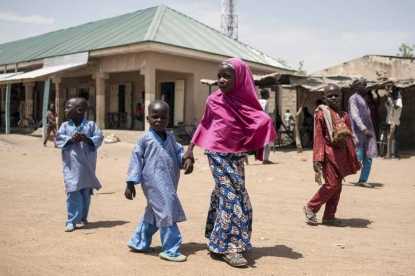 The scene is a stark contrast to Chibok 40 km away.

The market -- attacked in January by a suicide bomber -- has no goods to sell. Electricity poles lie at an angle, cables dangling to the ground as languid as the shopkeepers sitting outside their shops and the groups of children and men standing silently on street corners. 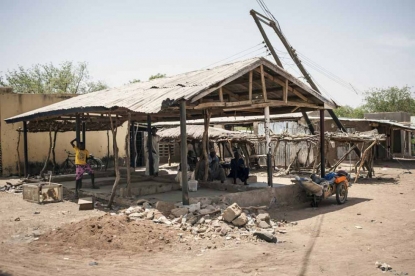 Heading out of the town, worshippers at the mosque, including young children, are frisked for explosives.

The Government Girls Secondary School itself is just as forlorn. “Girls” has been painted over in black on the battered sign outside. 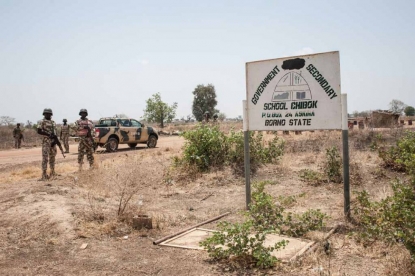 The sign at the entrance of the school, with the word "girls" blacked out. (AFP / Stefan Heunis)

On the other side of the perimeter wall, the dormitories from where the girls were seized have been demolished.

Bedframes, cooking pots and a solitary flip-flop are the only signs the site was once inhabited. 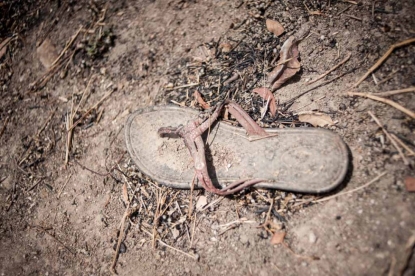 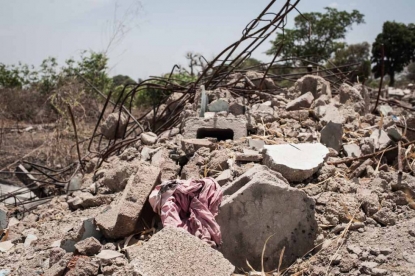 A volleyball net sways in the hot breeze. Dry grass pokes through the mounds of masonry and fallen beams from the dining hall roof. Lathes and agricultural machinery rust near outhouses.

Decades of under-investment and development, exacerbated by years of fighting, has left Chibok without electricity, water or decent roads.

Only one mobile phone network works in the town -- and even then intermittently. Since the mass kidnapping, there are now no state-run schools.

Parents without the means can’t afford to send their children elsewhere to be educated. Many people have been forced from their homes because of continued insecurity and live a precarious existence in Maiduguri, the capital Abuja, even 1,000 km away in Lagos.

Everyone I spoke to said Chibok had been abandoned and there was a desperate need for investment to rebuild for a better future.

But local and state government is barely functioning here. At the federal level there have been empty promises.

His finance minister Ngozi Okonjo-Iweala flew in to Chibok to lay the foundation stone.

But apart from neat piles of breeze blocks on the site, there is no evidence of work being carried out or indications it will start anytime soon. 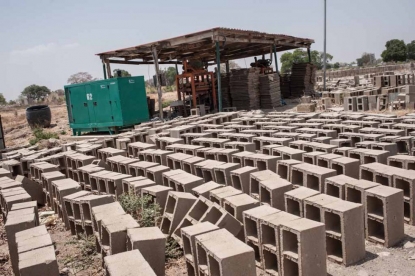 Bricks lie at the site of the school, waiting for the rebuilding to begin. March, 2016. (AFP / Stefan Heunis)

Even the pledges of international support to Nigeria’s government to help find the missing schoolgirls have so far come to nothing.

The millions of tweets demanding #BringBackOurGirls have come to nothing and as the second anniversary of the girls’ disappearance approaches, there appear to be few, if any, fresh leads about their whereabouts. 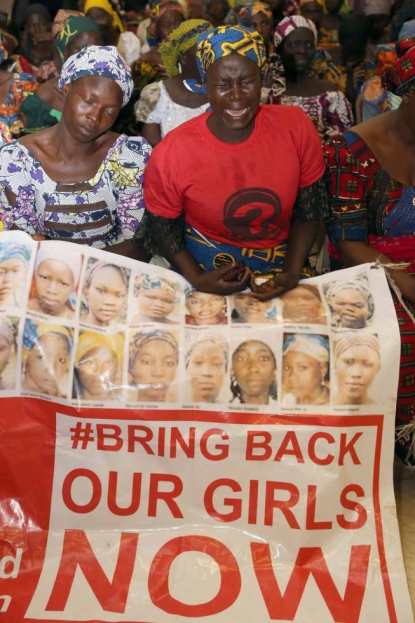 Mothers of the kidnapped Chibok girls at a rally in Abuja in January, 2016. (AFP / Philip Ojisua)

Nigeria’s military – newly confident after successes against the militants and backed by a government more committed to stamping out the insurgency -- struggled to understand why we would want to visit Chibok.

But it’s a symbol of the conflict, a glaring example of the huge cost of extremist violence to ordinary people, failures of security and governance and the daunting challenges of rebuilding.

Northeast Nigeria is increasingly opening up to a scrutiny it has never had in the past few years, as the soldiers regain control.

As people are discovering, particularly with news that emerged this week that Boko Haram kidnapped 500 people, including 300 children, from the Borno town of Damasak only several months after the kidnapping in Chibok, what happened is far from an isolated case. 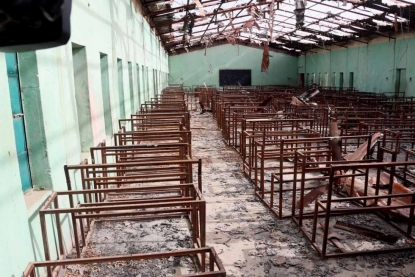