'Get behind the yellow line' - the Rockettes' orderly chaos

New York, December 28, 2015 – I’ve been covering the Rockettes since 2003, shooting their rehearsals and try-outs. They’re such an iconic New York institution, especially at this time of the year. In New York, it’s a ritual of the Christmas season to go see a Radio City show. And the Rockettes are THE show at Radio City Music Hall.

But shooting the rehearsals, you don’t get to see that much. So there is a kind of mystery to the dancers. You see them kicking in unison and smiling, but you don’t know much about them. So I’ve been seeing the same thing since 2003 and I thought it would be nice to see something that I haven’t seen before. 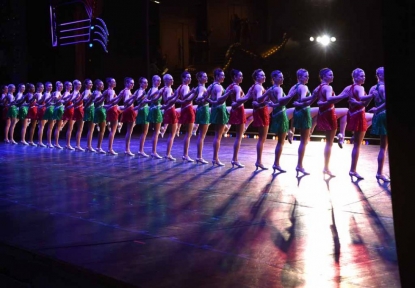 Their show is such perfection. But backstage, it’s perfection with organized chaos. If you stand in the wrong place, you’ll get run over. I finally got to see what goes on behind the curtain.

As a spectator, I’ve seen the show about six times. I love it. Everything about it. The numbers are great and so polished. The theater is beautiful, it’s just stunning inside. It’s just such a pretty thing to do at this time of the year. So this year, I asked the Radio City public relations people if I could spend a day with them or shoot behind the scenes of a show.

Once the Christmas Spectacular show starts its run in mid-November, there are about four performances each day until it closes a few days after New Year’s. They allowed me to attend an 11:00 am show in early December. 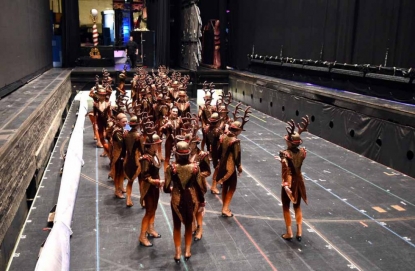 Reindeer preparing for the stage. (AFP / Timothy A. Clary)

Once I arrived I met the public relations woman from Radio City and she introduced me to the stage manager and the first thing we did was to go over the rules of what I could and couldn’t shoot. Turns out I couldn’t shoot a lot of things.

For one thing, I couldn’t shoot a Rockette unless she was completely dressed. Completely. So if she doesn’t have her gloves on, I can’t take a picture. The dancers go through eight costume changes each show. For one of them, they have 78 seconds to change into a different outfit. So as they come off the stage, they’re taking their dress off getting ready to slide into something else. As you can imagine, there were a lot of pictures that I couldn’t take. 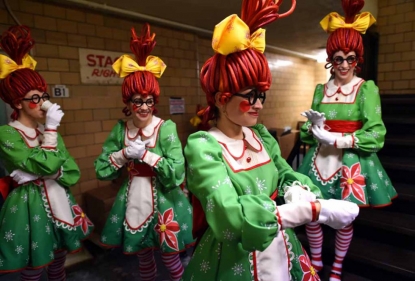 There are about 250 people backstage during the show, 150 of them cast – the Rockettes, Santa Claus, other dancers. And then there are the animals – the camels, sheep and a donkey for the nativity scene, which has been part of the show since it started running in 1933.

And for the entire hour and a half these 250 people and beasts are in constant motion – dressing, undressing, rushing from one part of the stage – the biggest indoor stage in the world I believe – to another.

So for the entire hour and a half, the stage manager was literally pulling me on and off the stage because every time I moved there was a Rockette coming in, or a giant panda, or a camel. 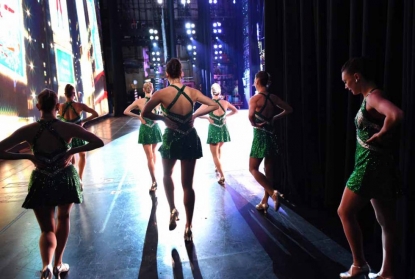 Heading out. (AFP / Timothy A. Clary)

Basically it was an hour and a half of a real workout. I was literally running up and down the biggest indoor theater in the world. And it’s not like it’s on one level. To get from one part of the stage to another, you often have to go down a couple of levels, run across and come back up.

So I had to be careful that I didn’t get in the way, that I didn’t take a picture of someone who wasn’t completely dressed. Oh, and that I wasn’t seen by the audience. 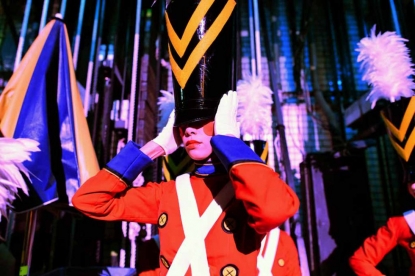 At one point, I was down below the stage with the Rockettes as they got ready for the number with the giant alphabet blocks. And there was this yellow line between the building blocks. And they kept saying ‘Be careful where you stand, Be careful where you stand, Get behind the yellow line.” And I was thinking, ‘what’s the big deal, I won’t be in the way.' But I moved. And good thing I did. That little yellow line? If I had been on it for a little while longer, I would have gone up on the stage with the Rockettes. 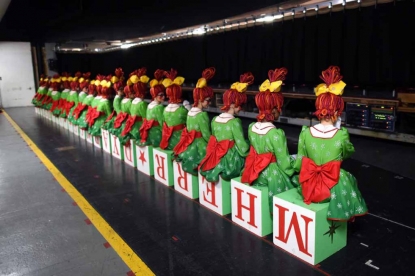 Basically backstage is controlled chaos. Everybody is coming and going and you have to be careful you don’t get run over. From the side, it looks like complete pandemonium. But in reality, everyone knows exactly where they’re going. There are these dancers who wear these giant masks and I asked – is there somebody who leads these people on and off and I was told ‘No, they know the routine so well that they are on and off like clockwork.”

I have to say, they were very accommodating in letting me have the run of the house. Working in New York with the entertainment industry is exciting, but there are a bunch of rules that you have to respect and if you break them, you’ll never work with them again.

The Rockette is a very polished brand and for them not to have it in a perfect light all the time, it’s not something that they want. I can understand that. 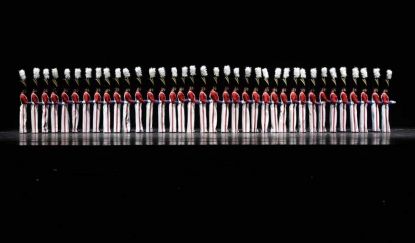 Before the fall. (AFP / Timothy A. Clary)

And the soldiers come tumbling down

The epic piece of the show is the toy soldiers act. It’s called “Parade of the Wooden Soldiers” and in it the dancers collapse like dominos. It’s been performed every year since the Rockettes began in 1933 with the same costumes and the same choreography.

I was shooting it from the wings and the hat of one of the Rockettes came off as they were falling down. That’s a big no-no. And of course, according to the rules, she’s not fully dressed. So the stage manager looked at me and his look was very clear – “if that picture goes out…”

Which of course meant that I didn’t have shots of the most iconic part of the show. So I asked to be able to go back and reshoot it and they said yes. 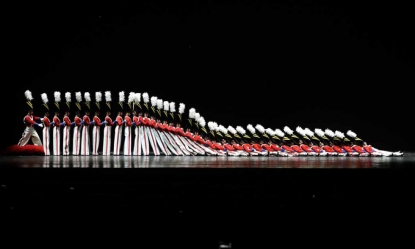 And they all came tumbling down. (AFP / Timothy A. Clary) 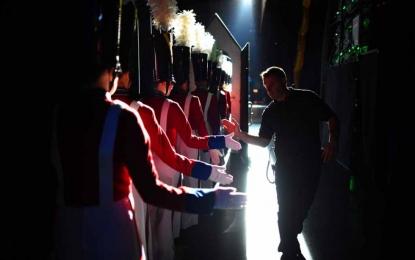 I spent a lot of time worrying about not getting in the way, but aside from the stage manager, no one really paid any attention to me. I recognized a few of the dancers, but for the most part, they don’t even know you’re there. They’re really busy. They have so little time to get on and off the stage. Their costumes are lined up, their hats are put in bins. 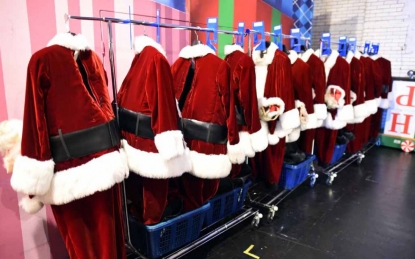 Everything is set out for them, so there are no mistakes. They don’t even notice anybody backstage, especially not a photographer, who is not part of the show. They’re too busy preparing for when they’re in the spotlight.

Click on a photo to start the slideshow:
Article suivant