The New Year, at the stroke of midnight, shaped up to be 2015 Reloaded, or worse. Will this be the year when German Angst makes an ugly comeback?

I ask myself this as a journalist, but also as a German citizen who, back in his homeland after more than a quarter of a century away, worries whether the country shamed by the Holocaust and reborn as a liberal democracy will muster the strength to stay resilient, hopeful and welcoming.

The entire country is asking the same question. And so far, the signs are mixed. 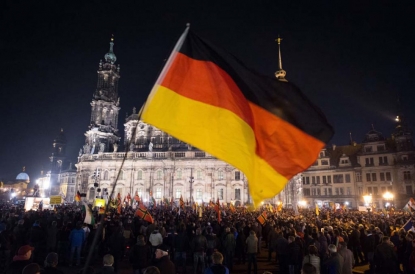 The year has barely started and Germany has already been stunned by a string of horrible news driving an emotional debate on the refugee crisis, its causes and outcomes, and what to do about it.

Passions have been inflamed since New Year’s Eve, when men from within a 1,000-strong mostly Arab and North African crowd groped, robbed and in two reported cases raped women in mob violence in the western city of Cologne that shocked the nation. 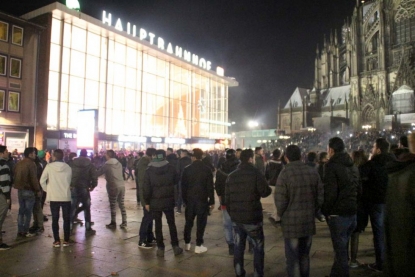 Police failed to control the chaos, then tried to pretend it didn’t happen. More than 700 criminal complaints have been filed. Heads have rolled, and politicians have pledged a law, order and deportation crackdown.

Many people fear this was the ‘tipping point’, the moment the mood flipped on what Chancellor Angela Merkel’s team has dubbed Germany’s ‘Rendezvous with Globalisation’.

It’s been a turbulent time that has brought out the best and worst in Germany.

On the plus side, people who argue passionately that “no human being is illegal” have welcomed refugees from the killing fields of Syria and other trouble spots with an unprecedented wave of goodwill. 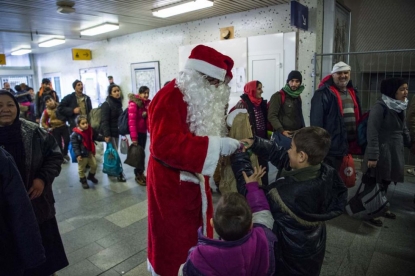 A volunteer Santa gives gifts to children of asylum seekers on December 24, 2015 at a train station near Berlin. (AFP / John Macdougall)

It’s not just the cheering, some say naive, crowds who thronged railway stations in September, when an already huge influx quantum-leaped to 20,000 arrivals a day.

Where bureaucracy has sometimes been caught flat-footed, people who never planned to be citizen-activists have organised on social media and community whiteboards to jump into the breach. 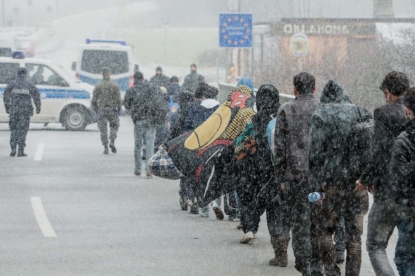 At Berlin’s now-infamous Lageso refugee registration centre -- where desperate families were left waiting in the rain to take a number, for days -- jobless youths were handing out bottled water and bananas from a shopping trolley last September.

They told me it was the right thing to do, and they had time on their hands. For them the pictures of a dead Syrian kid on a Turkish beach were more than a news flash.

So much for the good, and I hope it prevails. But then, there’s also the bad, and the really ugly.

The bad, and the ugly

Germany has also been rocked by a xenophobic backlash, and a strengthening of the right-wing populist Alternative for Germany party, whose no-mosque-in-my-neighbourhood rhetoric is not dissimilar to that of France’s National Front or the US’s Donald Trump. 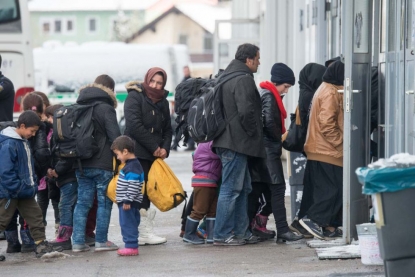 They now poll at around 10 percent, and Merkel -– as she struggles for EU-wide solutions and to reduce the influx -- must be grateful the next national elections aren’t until late 2017, though there will be several state polls in March. 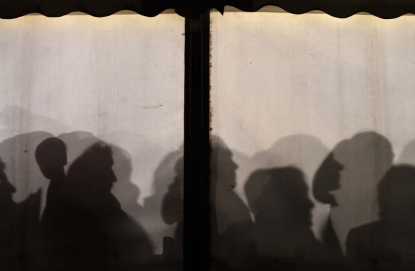 Migrants queue up at a government office in Berlin. January, 2016. (AFP / Tobias Schwarz)

Now, for the really ugly: I would call it a new wave of neo-Nazi terror, a sharp spike in beatings and arson attacks against shelters or buildings dedicated to housing migrants, some of which have been defaced with swastikas.

This has happened while hard-right vitriol has flared on social media and the streets.

I reported from Cologne on January 9 when PEGIDA rallied against “Rapefugees” and “sex jihad” near the scene of the New Year’s Eve crime, the iconic Gothic cathedral that towers as a monument of Europe’s Christian heritage. 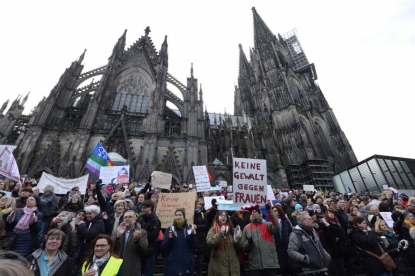 PEGIDA stands for “Patriotic Europeans Against the Islamisation of the Occident”, a term that conjures up medieval imagery of Christian crusaders battling Muslim empires.

The movement emerged in Dresden in Germany’s ex-communist east, a region which still lags the west economically and has no matching history of large-scale immigration.

Reporting on its rallies means diving into a hostile crowd that despises journalists as agents of a political-media traitor elite whose promotion of multiculturalism has sold the country out to an invasion of foreigners.

One of their chants is “Luegen-Presse, auf die Fresse!” – which roughly translates to “liar-press, we’ll smash your face.” 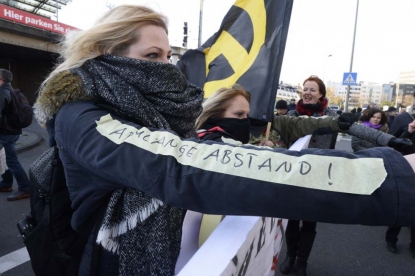 A far-right supporter sports a sticker reading 'at arm-length's distance,' in reference to a suggestion by Cologne's mayor on how women should behave to prevent being assaulted. January 9, 2016. (AFP / Roberto Pfeil)

In Cologne, as the rally escalated, pumped-up, extremist hooligans clashed with riot police, yelling “Where were you on New Year’s Eve?”. They hurled beer bottles at water cannon and took facefuls of teargas.

The next day unknown assailants chased random foreigners. In one case 25 men ran after a man of African appearance, who sought refuge in a group of six Pakistanis. The mob set upon all of them, beating and kicking them.

What’s up with Germany’s neo-Nazis? I’ve been asked this all over.

As a German who watched the Fall of the Berlin Wall on TV in suburban Sydney, my first response has usually been, ‘it’s complicated…’ 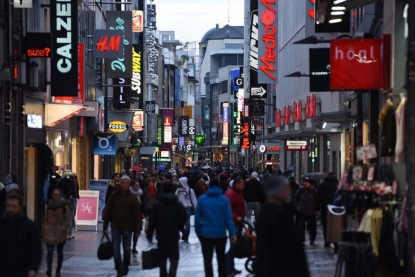 I don’t pretend to understand the pathology of someone who would set fire to a building where children sleep or hunt a person through the streets with a baseball bat because of the colour of their skin.

I figure some of them listened to too many of granddad’s war stories. Perhaps for others, there is a lure in breaking one of society’s last taboos.

But I believe hate is based on fear, and fear can make people do bad things. Germany’s horrible history is testimony to that.

Certainly, in German schools, politics, media and the arts, World War II and the Holocaust, that singular crime of industrial-scale murder, have for decades been dealt with earnestly and in depth. 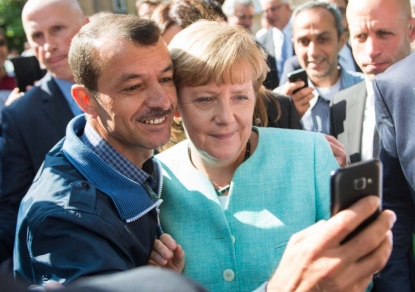 Germany has a nice eight-syllable word for it: Vergangenheitsbewältigung, roughly translated as ‘coming to terms with the past’. It’s core lesson is “Nie wieder”, never again.

Germans will tell you that no far-right party has ever crossed the five-percent hurdle to make it into the national parliament, unlike in many other European democracies.

Let’s hope it lasts. If the far right has surged in much of Europe, I believe it’s because domestic crises linked to rapid change in a globalised world are deeply unsettling to many people. 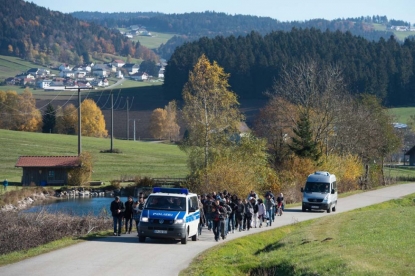 When I left Germany in 1985, it was split in two by the seemingly eternal Cold War, had three TV channels and listened to Nena’s ‘99 Red Balloons’, on vinyl. There was no Internet, no Skype, no mobile phones.

Today Germany, like everywhere else, has hundreds of TV and a gazillion YouTube channels, the longest remaining stretch of the Berlin Wall is a tacky tourist site, and at age 45 I’d have to Google who is at the top of the charts this week. 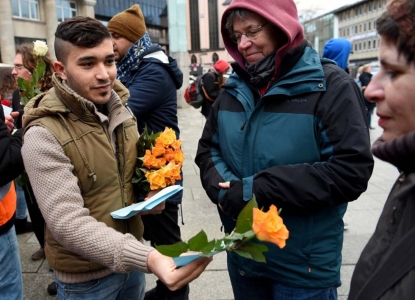 We live in an interconnected world of seven billion people and have only a faint grasp of highly complex systems that impact our lives, from microchips to supply chains to split-second trades. We are bombarded with news of distant wars and predictions of ecological doom that threaten to multiply today’s refugee streams.

For some, globalisation means sushi for lunch, foreign postings, a cosmopolitan, mobile lifestyle. They are riding the wave. For others it means slashed benefits and a job lost to some faraway place. Change for them often spells fear that things will get worse. Which can make some people do bad things. 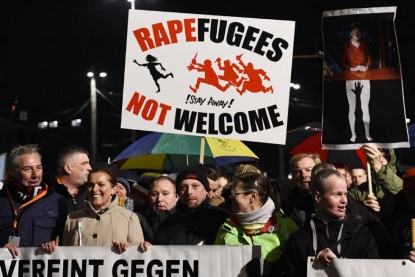 As a journalist, I’ll keep covering the refugee story -- the good, the bad or the ugly.

As a citizen, I hope that fear and hate don’t win the day. That safe, prosperous Germany will punish people who commit sex-, hate- and other crimes, no matter where they come from, and keep welcoming those in most desperate need.

As the guy with the shopping trolley said, it’s the right thing to do.

Frank Zeller is an AFP correspondent based in Berlin. 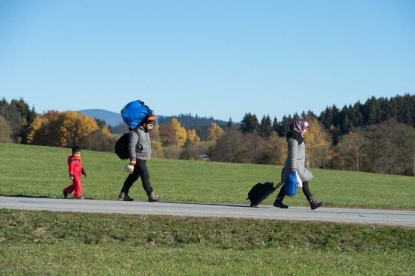