TIMBUKTU, Mali, June 30, 2015 – The thermometer in the foyer is stuck on 50 degrees Celsius. The highest it can go. Next to it, a refrigerator looks as if it is hanging on by a thread. It’s not yet noon on the French army base at Timbuktu airport in the lawless north of Mali.

“It’s been like this on and off these past few days,” says a soldier named Sebastien. “All we know is the temperature is above 50. We don’t know how far above.”

Ever since the families of French soldiers in Afghanistan were threatened over the phone, the press has been asked not to reveal troops’ surnames. Only Colonel Luc Lainé, the commanding officer based further east in Gao, can be identified in full.

It is just one of the – often restrictive - rules a reporter must follow while embedded with the French army. 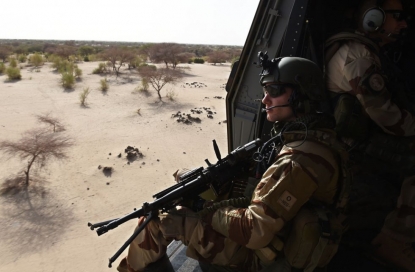 Why did AFP ask to come here, to Mali's remote north, with the soldiers of France's anti-terrorist "Operation Barkhane"? Two reasons. Firstly, to report on the soldiers actions on the ground. Secondly to gain access, under the protection of the army, to one of a rising number of places in the world where reporters can no longer venture alone without risk of kidnapping or death.

Being embedded – it must be said - is far from ideal from the reporter’s point of view. In the case of the French armed forces, it means being shadowed by a communications officer from the first to the last moment of their stay. It also means being ferried around on board planes, helicopters, jeeps and armoured cars without a word to say about where and when they are going. It means hours of waiting around for a convoy at a standstill to get moving again.

It means staying in military bases on the outskirts of towns, without being able to set foot in the towns themselves. It means having to wear a flak jacket and to talk to local people while flanked by armed men – who at best will remove their helmets so you can see their faces. 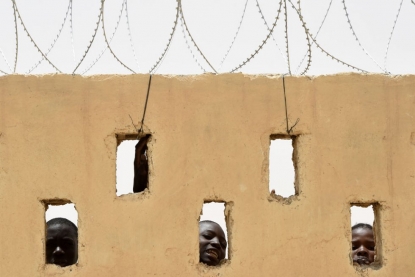 Children look through holes in a wall at the MINUSMA camp in Goundam, in Mali's Timbuktu region on June 3, 2015 (AFP Photo / Philippe Desmazes)

For a journalist who is used to doing the exact opposite of the above, it is a form of purgatory.

But it’s a simple equation. Without the army we wouldn’t be here. Northern Mali has become too dangerous to venture without protection. Two of our colleagues from RFI were kidnapped and murdered while reporting in Kidal in November 2013. No story is worth the risk of getting killed, or spending three years as a captive in the desert, chained to the bumper of a pick-up truck.

To accept the rules or not

So you either accept the rules, and the limitations, and try to do your job as best you can – or decide the rules are too restrictive and give up.

When we arrived at the base in Gao, the photographer Philippe Desmazes and myself, at the end of May 2015, it’s one of the first things we told the senior officers who were waiting to welcome us: ideally we would prefer to be here without them. 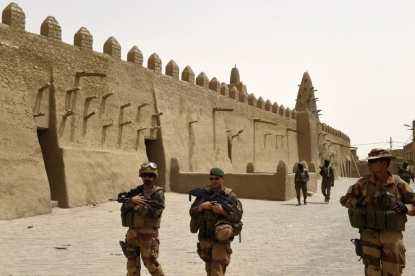 To stay in town, find our own driver and interpreter, come and watch the army at work, write a story and leave again. That was how we operated in Gao in 2013. Now it is just too risky.

After a number of trips with the French, British and American armies, I have learned that the military appreciate frankness. At first they tend to be wary of journalists. Most have a story to tell about some mishap involving the press, and they fear for potential damage to their careers.

But once they can see you know the rules and are willing to play by them – which doesn’t mean giving up your independence – they tend to trust you. And do what they can to help you do your job. 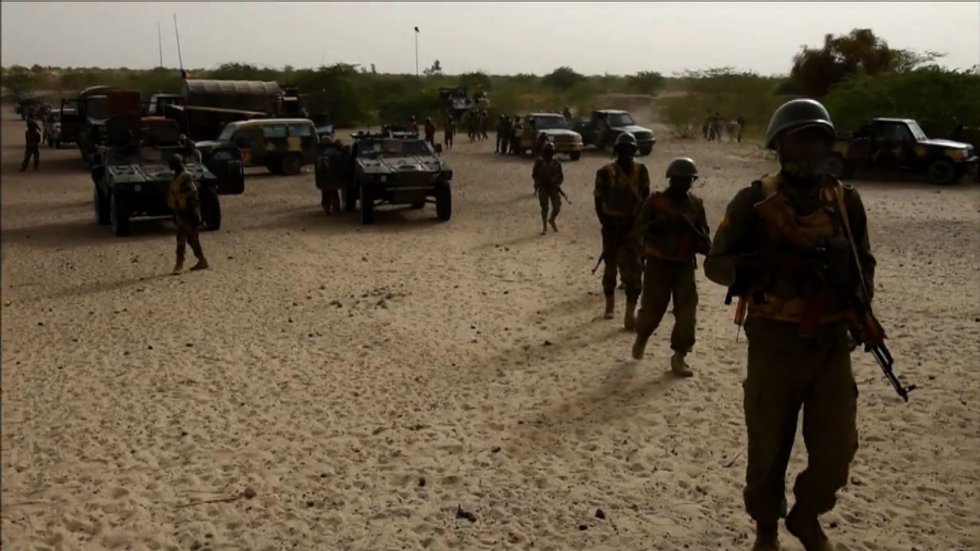 Click here to view this video on a mobile device

A few things are banned outright: no revealing the mission’s itinerary before it is over, and absolutely no photographing or quoting members of the French special forces should we run into any of the ‘invisible men’, as one officer called them.

The plan was to stay in Gao for two days, then five days on patrol around the Timbuktu base, in a lawless area to the west of the city. Here, as in pretty much the whole of northern Mali, Bamako’s authority holds no sway.

A blast and a siren

On day one, we are woken up before dawn by a blast in the distance, followed by the long wail of an alarm. We’re sleeping, like the troops, in large air-conditioned tents partitioned with draped fabric into individual rooms with little camp beds.

Our orders are to dash for the nearest shelter – a tunnel the height of a man made of giant sand bags with a reinforced roof. There we spend an hour huddling with the soldiers from neighbouring tents, some of them half-dressed, whispering as we stand there listening to the radio to find out what happened. It turns out a rocket landed in the nearby Dutch peacekeepers’ camp. No damage or injuries. 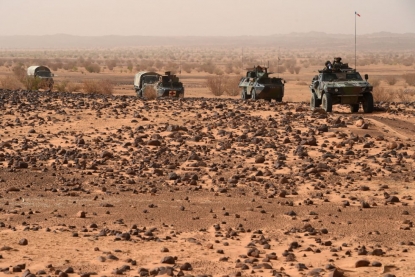 “Bad luck,” says an officer. “Just as you get here, it’s the first alert since Easter.”

“Quite the contrary,” I tell him. “For us journalists, it’s always better when there’s something going on...”

We never did find out who fired the rocket, from a nearby plateau used for helicopter take-offs and landings. Jihadists and Tuareg fighters set up their rocket launchers on wooden ramps, or sometimes just resting on a cluster of rocks, using a timer so they can get away before they detonate. Not precision warfare by any means.

We had asked before leaving Paris to be allowed to leave the base in Gao, and get a feel for how local people live here. Our PR officer Lieutenant Jean-Baptiste, ran the idea past the officer in charge of community outreach and the next day we were off, headed with a small contingent for an area of small farming allotments where the French army recently installed an irrigation pump feeding from the Niger river. 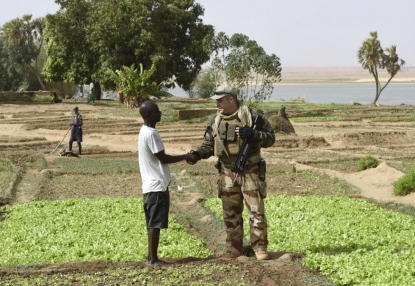 A French soldier greets a farmer on the banks of the Niger river in Gao, on May 30, 2015 (AFP Photo / Philippe Desmazes)

The presence of the military can have a distorting effect: hard to tell if local farmers are telling us the truth – or what they imagine the troops want to hear. So you make sure to ask the same question several times, in different times and places, to see if people’s stories add up.

The same applies as we talk to people in the packed town market, and to a local radio host who received truck batteries from the French army to store electricity generated by solar panels.

The military never tell us what to write. Neither do they ask to read out our stories before publication – although we will sometimes run a technical point past them for checking. We have our own portable transmission equipment, two small B-Gan satellites and an Inmarsat satellite phone to be fully independent. 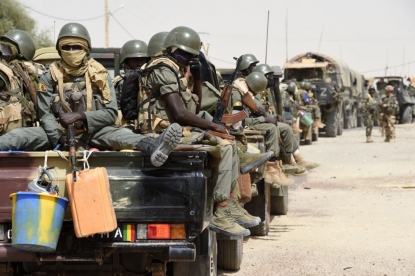 One morning we head out to meet a group of 70 soldiers at a Malian army base in Timbuktu. We will be travelling with them into the desert for five days. But most of them come from the south of Mali and turn out to be woefully unfamiliar with the art of driving on sand.

They pack into the back of Toyota pick-up trucks whose smooth tires turn are pretty much useless on the soft sand. They quickly get bogged down, and have to be towed out by French armoured cars and trucks.

The patrol is headed to a collection of remote villages dotted around lakes that dried up years ago. People living here say they feel abandoned by Bamako, whose police, gendarmerie and army have all pulled out of the vast region.

Armed bandits target the villages on a regular basis, with complete impunity. Our Bamako bureau has reported on this climate of lawlessness, which has driven tens of thousands of people from their homes. Now we will get to meet some of the people affected, and help tell of their plight. 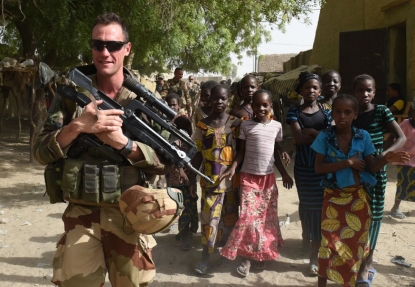 Youngsters gather beside French and Malian troops at Douekire in the Timbuktu region on June 2, 2015 (AFP Photo / Philippe Desmazes)

Philippe sets up to shoot some pictures from the outside of an armoured vehicle. I am fortunate enough to have a spot on board the medical armoured car, the only one with air conditioning. For the first two days – after which the air con packs in in a cloud of dust.

It is more than 50 degrees out at midday. Forty-six inside the vehicles, a column of saunas-on-wheels. Like the troops we are drenched with sweat from sunrise to sunset.

A wet sock wrapped around a water bottle fixed on the outside of the vehicle – a system known as the ‘Tuareg fridge’ – keeps water at a lukewarm temperature. Others do without the sock and steep a teabag directly in the hot water. 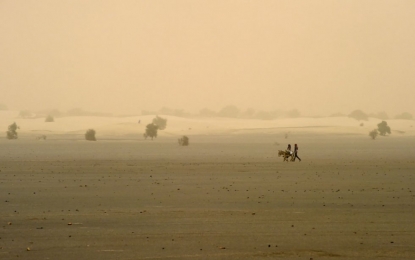 People walk across the dry lake of Faguibine near Bintagoungou in the region of Timbuktu, northern Mali, on June 4, 2015 (AFP Photo / Philippe Desmazes)

Come late afternoon the patrol pulls up and forms a camp circle, like in Western movies, around the two trucks carrying fuel and equipment. Some of the soldiers had the foresight to pack folding tables and chairs, stoves, kettles and coffee makers.

Even cool beers – for the two days that the coolboxes lasted – drawing envious looks from a lieutenant colonel passing by a tableful of troops relaxing with a bottle in hand. Out here in the desert, each man fends for himself, regardless of rank. Everyone gets the same army rations. Fortunately, though, the French are famous among armies the world over for their rations. (On the black market the going rate is five US to one French ration.)

Shower time is the highlight of our day: standing under a plastic pouch suspended in between two doors of an armoured car, behind a tarpaulin pinned there for privacy. The water is hotter than in my Paris apartment, but is feels divine to rinse off the dust caked onto my face. Then stand and dry in the breeze – a fleeting moment of coolness. 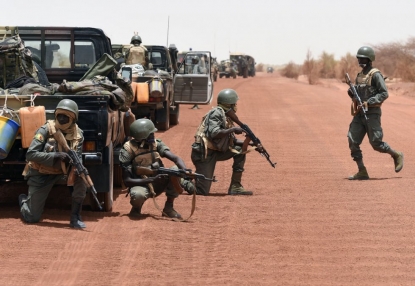 Silence descends on the camp little by little. No white lamps are allowed – too visible from afar. Our headlamps are switched to red, giving just enough light to set up your camp bed and read a few pages from a paperback. The snorers are moved to the very edge of the camp.

Soldiers with infrared binoculars get set up for the first shift on the nightwatch. By 9 pm they are the only ones still awake. We're up again before dawn, at 4.30 am, in time to heat some coffee, pack up camp and, at 6:00 am, set off again into the desert.