Interview with a geisha

Kyoto, December 2, 2015 -- There is a scene in the 007 movie "You only live twice" where Japanese secret service agent Tiger Tanaka says to James Bond: "In Japan, men come first, women come second."

Almost 50 years on and in contrast to the West, the phrase "ladies first" has yet to pass into the local lexicon, despite Japan's reputation for perfect manners and unfaltering politeness.

On a recent visit to the mystical city of Kyoto, I tried to find out why. But first I would need to track down a geisha. Easier said than done. 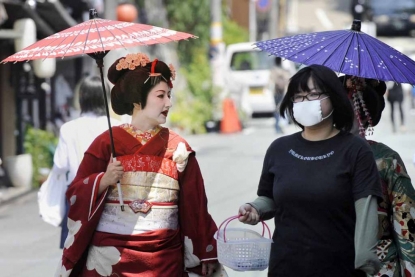 Attempts to interview a geisha have driven better men than me to despair. It can be next to impossible to interview a geisha, or get a glimpse inside their gilded, cliquish "flower and willow world." So when a friend in the fashion industry who hails from Kyoto said she might be able to introduce me to one, I took a few deep breaths.

"Please tell her sorry but we can't pay," I winced, half expecting those words to be a deal-breaker.

Thankfully it wasn't and we arrived for our date at a quaint teahouse in the fabled entertainment district of Gion, turning heads of tourists as we schlepped our cameras with us.

Doll-like geishas in elaborate kimonos, faces powdered white, floated elegantly along the cobbled streets outside, just as they did in the 17th century. 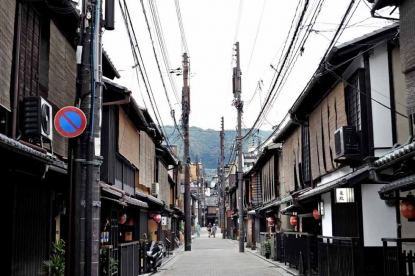 Stooping to enter through a low door, it was like stepping back in time.

The teahouse had been booked by the geisha's "patron" -- a wealthy client known as a "danna" -- for an hour before it opened for business and we were ushered up a rickety wooden staircase to a room overlooking the street below. The patron was a friend of my friend, it turned out, and I had left the peculiar complexities of Kyoto's wheeling and dealing to her.

As she arrived for our interview, celebrated geisha Kikumaru bowed demurely and met us with the traditional greeting of thanks in the soft Kyoto dialect: "O-kini."

Kneeling on the tatami mat, she did not mince words when it came to social etiquette, particularly on the controversial subject of gender equality. Geishas -- or geiko, as they are known in Kyoto -- take great care to walk three steps behind a man, a flashback to ancient Japan which would have leaders of the suffragette movement turning in their graves.

"Hang on," she said playfully. "It's perfectly natural when you think about it. Gentlemen don't walk in front because they think they rule the roost.

"It used to be dangerous to walk outside in Japan because people carried swords. You could get run through. That's why gentlemen go first. It's chivalrous actually."

Skilled in Japanese arts such as dance, the lute and three-stringer shamisen, the job of a geiko -- performing girl -- is to entertain exclusive guests, normally over dinner or at banquets. Geisha apprentices talk with guests at a traditional Japanese restaurant in Kyoto. May, 2004. (AFP / Yoshikazu Tsuno)

These clients, often high-profile politicians or businessmen, do not even know how much a night costs until they receive an eye-watering monthly bill.

"People think it's glamorous but it is a test of strength," said Kikumaru. "Geishas are made of hard stuff."

They spend the next five years training in performing arts, gracious social etiquette and conversation skills. Usually at around 20, they assume the title of geiko.

However, the strict convention governing the life of the some 175 geikos currently working in Kyoto sits in stark contrast to the freedom and mod cons enjoyed by the upwardly mobile women of modern Japan. I asked Kikumaru if she ever regretted her career path and she replied with brutal, and quite touching, honesty about life in the cloistered world of Kyoto's five geisha quarters, known as "hana-machi" (flower towns). 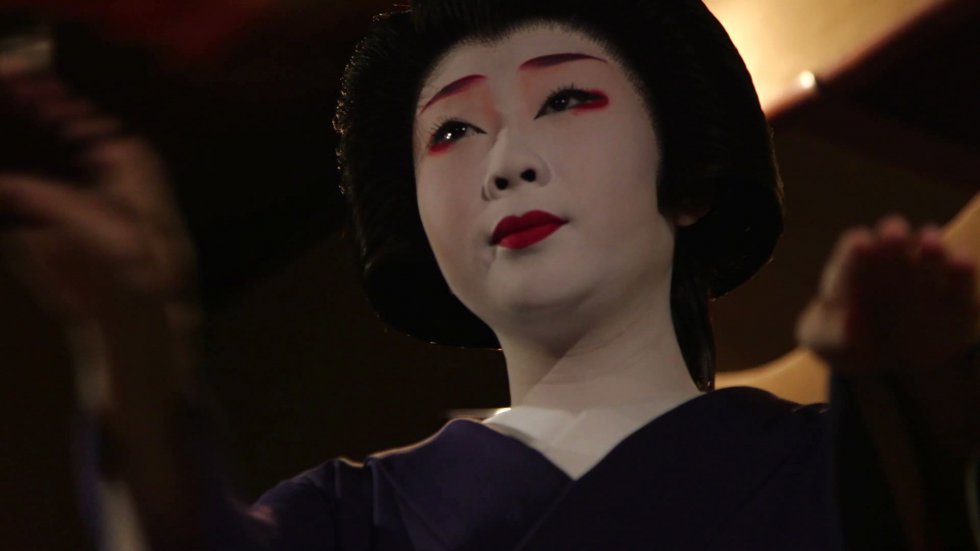 "You are constantly aware you're living a life which isn't normal," she nodded. "You are coloured by this lifestyle as a geiko and you do feel a disconnect with the general public.

"If a maiko on her way to a banquet in her kimono sees schoolgirls of the same age in their uniforms, she will imagine them going off to eat dinner together while she's sitting on a tatami floor. She doesn't have any private time and shares a room with three or four other girls.

"You sacrifice your teenage years training to become a geisha and sometimes you can feel you want to give up," added Kikumaru, now 31. "But you have to conquer those feelings." 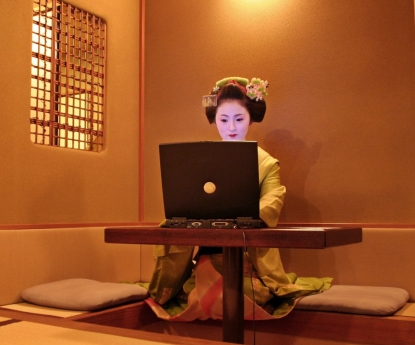 A geisha apprentice in front of her computer at a Kyoto teahouse in December, 2006. (AFP / Daniel Rook)

Geisha live a single life and once they marry, they must retire from the profession.

Even everyday stuff, such as popping out for a burger, calls for a daring undercover mission -- and a cunning disguise.

"We have to be very careful of the image we project so if a maiko gets a craving for French fries we have to put on a pair of jeans," said Kikumaru. "We then have to go to a fast-food restaurant on the other side of town, bring them back home and eat them in secret."

Um, are you on Facebook? "Hardly, dear," she smiled, before we exchanged numbers and agreed to keep in touch.

I now have a geisha on speed-dial. Which is kinda neat for a lad from the dodgy end of Islington.